A few days ago we received a call from one Mary Juanita Buckley G_______, age 81, who lives in Las Vegas, NV, with her grown, adopted daughter.

As a young girl of 15, on March 26, 1950, Juanita, as she was called then, joined Hawthorne Lane together with her mother, Mrs. Lloyd Buckley (Helen). She remembers how the two of them walked to church from their home on Clement Avenue. She also remembers singing in the children’s and youth choirs…

Juanita’s father was already a member of HLUMC before he and Helen married; the marriage was an unhappy one, apparently, and they divorced. Helen had to work long hours, and Juanita was raised mostly by her maternal grandmother. After a while, they moved away—and while Juanita has no living relatives from that time, or any actual records to verify this part of her story, she has vivid recollections.

Juanita married and divorced then married again, this time to a practicing Roman Catholic. For we are not sure how long, the two of them lived in Guatemala where they adopted their daughter, Juanita’s only child. Juanita helped raise her daughter in the Catholic Church—but she herself never joined.

She called because, as she said, she is preparing for the end of her life, trying to put her spiritual affairs in order (along with the rest). As she looks ahead, she is looking back, trying to find her real origins… which is precisely what our sermon and worship series this year is all about: ancestry.faith. Looking looking for our spiritual roots (in the Bible, in the tradition, in our worship) is a a way of claiming our truest identity. And such an important task—call it: spiritual genealogy—but one that is so often neglected or forgotten.

As Juanita herself said, “you never think about these things when you are young, but it is very important to me now.”

Juanita desires a Catholic funeral, and to be more closely affiliated with the church of her daughter and grandchildren, but she has always considered herself Methodist. She is not sure she was ever baptized—our membership books say she joined by “vow,” though we are not certain what that means—but she thinks, indeed hopes, that she was baptized here. Which is why she called.

It occurred to me to wonder if she had received Holy Communion, ever, since she left here. So we asked. She said no. She could not commune in the Roman Catholic church; and apparently had not been back to a Methodist church since she left here. One way or the other, she said, she “had missed” it.

We decided (in what may not be a totally orthodox gesture), to make it possible for her to commune with us, and us with her. This past Sunday we took a piece of the Consecrated Bread, and a bit of the Consecrated Juice, boxed it up nice and tight and sent it to her, along with notes and signatures from our congregation. In that way, though she is far away, she will eat again from our Table. And we will surround her with a community of love and worship.

A holy Communion with one of our saints, whom we would not know to see, but recognize by faith; who left us, but is with us still, as indeed we are still with her. 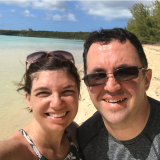 We Worship,
We Grow,
We Serve